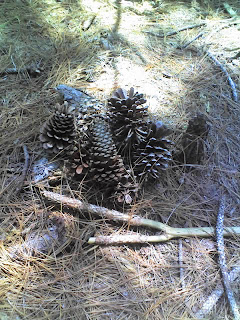 Missed FTF's - Well that's it then.. I am selling the house for a new pair of night vision goggles!

My phone went off last night around 11 p.m. telling me a new cache was posted. Jumped online and saw the cache named "The Lion Sleeps Tonight 3" was right on my way to work.
"Perfect", I thought. First thing in the morning I will drop off my daughter at the bus stop and boogie right over for a quick First To Find.
All the way over to the cache site I was really hoping to beat TimMcGrawlookalike to the punch, especially since the post came out so late last night. Would I make it in time? Would nice clean log sheets be waiting for me? My hopes were high as I opened the cache to see my prize, but nooooooooo. Not only did Mr. TMLookalike hit it last night but another relentless cacher mobettamerf who I do not think actually sleeps beat me too . Heavy sigh, better luck next time. Congrats to all and I will be out there next time.. Me and my night vision goggles .
MUTANTS! - 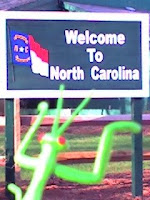 If you have been reading my blogs you will see every once in a while a Mantis Sighting. Photos of this interesting TB have been taken by me in five states from North Carolina to Michigan and back (twice). With the permission of the owner I have been hanging onto the little guy for several months now and even though he seems to enjoy hanging from my rear view mirror very much I think it is time to let him go back into the wild.

There is a problem though. I too enjoy having a travel bug hanging from my rear view mirror but what could possibly replace my well travelled friend? Meet my new little friend - Mutant Mantis! 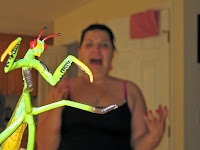 This guy reminds me so much of the old great B movie mantis monsters. Seen at left teasing my daughter Brianna. Mutant Mantis is going to be travelling where ever I go and will be photographed doing what movie monsters do, wreaking havoc upon the world! So look often to see what MM has been up to. Last I heard he was heading for down town Raleigh, NC. This should be fun!

Fellow Cachers- You just never know who you are going to bump into in the morning whilst caching. Was pulling up to my Taxman Cometh cache to verify it's coords and who do I see with a GPS in his hand but my friend Ringer2410. I scooted by not wanting to disturb his hunt but he must have seen my car and pulled up next to me after he was done. He apparently must have liked the hunt cuz he used cool descriptions like "very clever and devious". Just love making geocaching fun. We gabbed a good ten minutes or so before having to head off for work. This brought a smile to my face because it is always a treat getting some time to actually talk face to face with fellow cachers.
Special Note - Received a really nice email from Team P and USAFSP. They came by the Oxford, NC area this last weekend and hit everything. Since I have about twenty caches there myself including two series (Barnyard Fun and Playing On The Train Tracks). They had me on standby incase needed. No need necessary because they hit 43 for the day! So congrats to team P for doing a fine job of caching and in 100+ degree heat ta boot!
Posted by Unknown at 5:05 AM