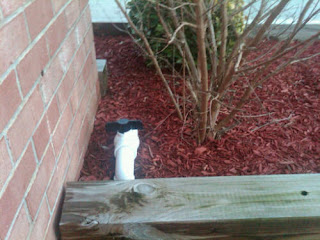 Please don't forget to visit our GeoSnippits Geocaching Tutorial Videos Website at
http://www.geosnippits.com
Posted by Unknown at 12:37 PM 2 comments: Links to this post

A Very Nice Modification of My Evil Ant Hill Geocache

I received an email from fellow geocacher Seth Jones who sent me some photos of a modified Evil Ant Hill Geocache. Check out what he wrote:
I got a smallish box, lined it with a plastic bag, and then made a small pile of dirt (you need it to be fairly pure dirt, for easier removal later. No rocks, grass, twigs, etc) 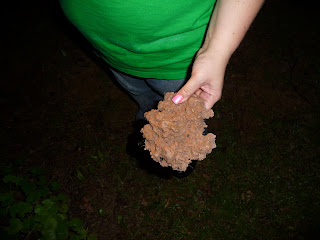 -- Then I made a large batch of plaster of paris, and poured it over the dirt, making a plaster cast of the dirt hill. After it set, I peeled it out of the plastic, and washed the dirt out of the bottom. I then filled the cavity where the dirt was with a 2-part resin from the craft store. Before the resin set, I implanted a small plastic container with a screw-top lid. You've probably seen it: it's a touch bigger than a bottle-cap. 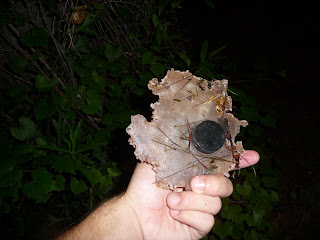 After it set overnight, I cracked it out of the plaster, and chipped out the crevices. (soaking it in water really helped here). I then hit it with some textured brown spray paint. I placed it at the base of a tree just at the edge of some woods. There are some vines climbing the tree that provide a small buffer of deadspace around the trunk. I have the container there, amongst the leaves. 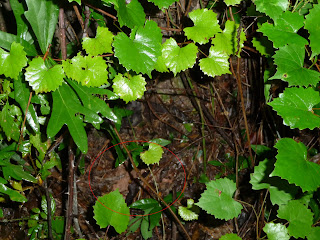 Please don't forget to visit our GeoSnippits Geocaching Tutorial Videos Website at
http://www.geosnippits.com
Posted by Unknown at 10:51 AM 5 comments: Links to this post

A big thanks to Cornellfinch from Portsmouth, England who twittered me this post in the groundspeak forums.
Apparently a geocacher who goes in the forums by kywaterfowler took my fire hydrant geocache up a notch. See Below: 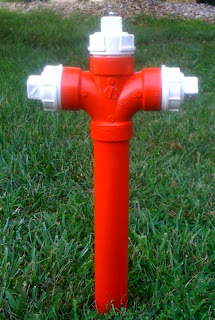 Please don't forget to visit our GeoSnippits Geocaching Tutorial Videos Website at
http://www.geosnippits.com
Posted by Unknown at 6:45 PM No comments: Links to this post

One of our viewers who recently started geocaching sent in a request for us to go over the different types of geocaches available. So we did just that and turned it into an episode for Michigan Magazine TV. Obviously because we only had about five minutes to work with I was only able to discuss a few. We will do more in another episode. Stay tuned.
If you cannot see the viewer above you may see the actual video by clicking the link below:
http://www.youtube.com/watch?v=N7_2gD-0mzc
GeoCache: I'm NOT Obsessed... Right?
http://headhardhat-geocache.blogspot.com/
-------------------------------------------------------
Twitter me at
@headhardhat 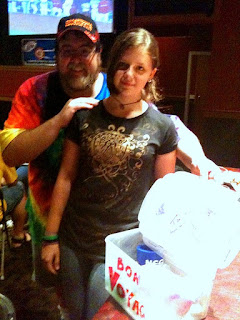 I had the absolute pleasure of attending a geocaching event in my honor called "Bon Voyage HHH: Don't Forget the Little People". It was put together by fellow geocacher and good friend NCBiscuit to celebrate Geoness and myself going out on the road to begin filming our television show Treasure Cache TV.
At the event a bunch of us do what we do at any time we get together. We eat food and talk about geocaching. Throw in some fun rounds of pool and watch England and the USA tie it up in the World Cup, fun was had by all.
As a going away present Geoness and I were given one of the largest Lock N Lock boxes filled with goodies from North Carolina and the NCGO. I am going to do my best to add some of these trinkets in the show itself. Let's see if we can do some creative hiding :)
I want to thank NCBiscuit and the rest of the NCGO gang for giving us such a fine send off and for them to know that it would be impossible for me to forget such a fine group of amazing friends.
GeoCache: I'm NOT Obsessed... Right?
http://headhardhat-geocache.blogspot.com/
-------------------------------------------------------
Twitter me at
@headhardhat

Please don't forget to visit our GeoSnippits Geocaching Tutorial Videos Website at
http://www.geosnippits.com
Posted by Unknown at 4:19 PM 3 comments: Links to this post

Setting Up Your Own Geocaching Camping Adventure 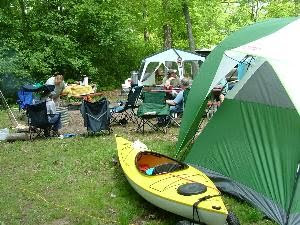 (photos by Annie Love)
What a combination. We love geocaching and we love camping. Why not combine the two for an outrageous weekend of outdoor fun?
To me geocaching and camping is like Martin and Lewis, Superman and Clark Ken, Peanut Butter and ... well you know. Needless to say they go together very well. Think about it, not only do you get the opportunity to really explore National and State parks. Many of which do allow geocaching but there are usually a ton of them in the neighboring communities near by. A geocaching smörgåsbord as it were. As you walk the trails and discover the different points of interest within the park system you can get your Indy Jones on and view wonders that only the ones willing to explore will find. Geocaching is made for just that. 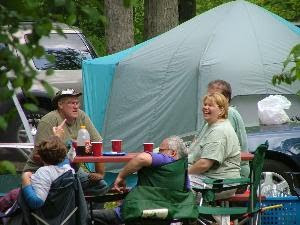 Please don't forget to visit our GeoSnippits Geocaching Tutorial Videos Website at
http://www.geosnippits.com
Posted by Unknown at 9:58 AM 3 comments: Links to this post

Cachers of the Round Table the StickPic and Me 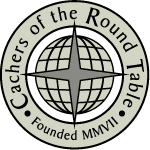 One of the many cool things doing a video series like GeoSnippits and now a television show like Treasure Cache TV is it allows me to mingle with so many other geocachers who also happen to do interaction with the media. In this case podcasts. A podcast is sort of like a taped radio show that is placed on the Internet and can be listened to at any time. Darrylw4 of Cache-a-maniacs fame also heads up a podcast known as the Cachers of the Round Table. Here hosts of podcasts and in my case videos and TV get together to discuss different interesting topics that are related to geocaching in some way.
In this month's episode (June 2010)
http://www.cachersroundtable.com/index.php?post_id=620364 we discussed Caching Connections which touched everything from social networks like Twitter and Facebook to photograph based websites such as Flickr. A really good show if I must say. Actually I do, it's a really good show.
One of the other features on CRT is each of the guest panel describes their favorite gadget, gizmo or application for the month. Mine was an rather cool product known as the StickPic which can be attached to your personal camera and placed on a hiking pole to provide more background to your photos when you are by your self in the woods somewhere. Check it out.
That and more on this month's edition of the Cachers of the Round Table Podcast.
GeoCache: I'm NOT Obsessed... Right?
http://headhardhat-geocache.blogspot.com/
-------------------------------------------------------
Twitter me at
@headhardhat

Please don't forget to visit our GeoSnippits Geocaching Tutorial Videos Website at
http://www.geosnippits.com
Posted by Unknown at 7:16 AM No comments: Links to this post