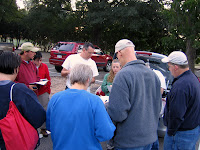 I have said on many an occasion that North Carolina Geocachers are some of the friendliest and giving people I know. This last Saturday I had the privilege to contribute some of my time along side these caring people for a special gathering. The UNC Jaycee Burn Center hosted a World Burn Congress Event. Where a little over a dozen geocachers of the NGCO took about 20 young adults who came from all over the United States geocaching for their first time in Pullen Park (Raleigh, NC). 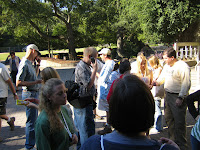 We all met up at our designated place just as the sun was starting to shine. I could tell already that it was going to be a sparkling day just as so many down here are. The mist was slowly burning off and you could smell the aroma of coffee from my fellow geocacher's liquid breakfast of choice. Once everyone was accounted for we started our first task of the day. Hiding eight special caches around Pullen Park for our young adventurers to find. Within each cache held a log book (of course) and a special activity to be done as each cache was found. Once assigned we then broke up into groups and fired up our GPS units to record each cache's coordinates. Within no time the caches were hid, we finished our coffees and the bus full of future cachers pulled up. 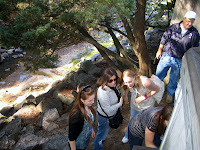 This event was orchestrated by our very own Jessica and Dave who started the event off by having everyone introduce themselves followed by some fun ice breaker activities and an explanation of what geocaching actually is. This was a great way to begin because by the time we were ready to start caching everyone was stretched, relaxed and joking with each other. We divided into three groups of around 11 people each all starting with a different cache to find. Our group called ourselves The Tail Chasers which ironically is a great depiction of what a geocacher looks like when they are close to a cache. That wonderful little dance we do as we circle in to ground zero. 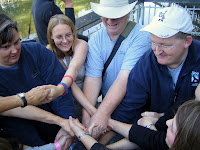 Tally Ho! The hunt was on and as the experienced geocachers explained how a GPS worked the younger set watched intently. Within a few short minutes they were following the electronic arrow to our first geocache. It was obvious that a lot of thought went into each of the eight caches. The cache itself was a medium sized Tupperware container that held a logbook that had to have the group name signed in each and a special activity. Each geared for fun, team building and smoothing personal barriers by giving all involved the feeling of unhindered camaraderie. For example one of our puzzles to figure out was the human knot. We gathered in a circle and everyone held hands creating the knot itself. The idea was to untangle the knot without letting go. We giggled and laughed as the twister like game unfolded ending with all in a large circle. 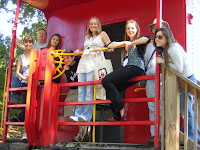 Pullen Park is a very scenic place filled with the sounds of a fully running carousel and a working railroad. It has a huge picnic area surrounded by lush trees and glistening ponds. As we went from cache to cache within the park we were rewarded by having a ride on the railroad and the carousel as well. We learned history about the park itself and found out that it is the oldest park in North Carolina among other interesting facts. We had a blast with the bean bag toss and learned that hiding a cache in a giant holly bush takes special care but the hunt for the find is a powerful draw. 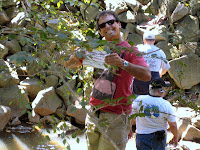 You could see the enthusiasm in each of our young friends eyes as the morning progressed. Everyone waited anxiously as each of the initial seven caches were opened anticipating what awaited for us next. Then after the seventh activity was completed there was a bonus eighth and final cache to find. Who ever of the three groups that found the eight cache first could claim the golden ticket and would receive first prize for the day. You would think with the incentive of claiming first prize everybody would be hustling to find the golden ticket but instead we enjoyed each others company so much nobody was in a hurry to have the event end. So we all just gabbed and soaked up the North Carolina sunshine enroute to our final destination. 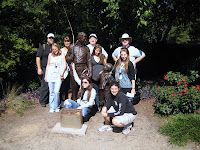 Now with the final cache found it was time to bring this fun filled event to a close. What awaited our newest geocaching friends was a well deserved pizza party and for the rest of us to meet up at a local watering hole to partake in liquid libations and more conversation. As we gave our final hugs and handshakes to each other it was obvious to us that some of these young adventurers will continue in their own personal pursuits of geocaching. Yet more importantly we hoped in some small way to show them that whatever difficulties life has bestowed upon them that there are people who will ignore the superficial and embrace the person within. We wish them all the very best.

well they are very nice people