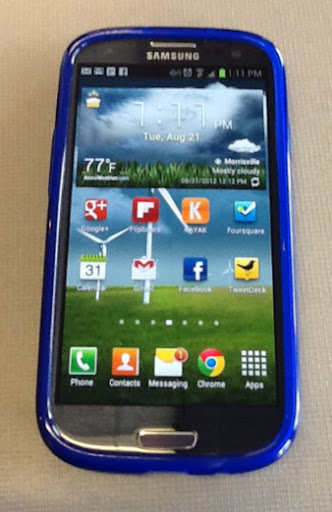 In the geocaching world it seems that there are a whole lot more geocachers using smartphones these days than standard GPSr handheld units. This is amazing to me for several reasons. One, the shear popularity of GPS capable phones now being used by the general public. It really wasn't all that long ago that the only people who had a smartphone was a company given one. Two, the total amount of location based applications that are available at almost zero cost to the consumer. For the longest while it seemed that Geocaching apps were the only ones that were around except for a map app. The final reason blows my mind more than everything. Many of these smartphones being used with Geocaching would cost the consumer hundreds of dollars to replace if broken and geocachers do not seem to bat an eye. Are we all just praying to the cell phone gods and hoping the inevitable just won't happen?  Really? How many rivers and streams do we cross, rocky terrains do we hike or concrete walkways do we travel? These amazing tools are handy but expensive. Yet most people not only do not take safeguards to replace a device with minimal cost but even play the game of chance like it couldn't happen to them.

That is a very risky gamble in my book.

When asked not too long ago on my Google+ stomping grounds I was literally floored by the variety and intensity of the responses to the question of "Do you have insurance for your smartphone?". All the responses were from geocachers and most used their smartphone as much or more than their handheld GPSr unit.

Here is what I realized.

Some people do indeed have insurance on their phone but verbally only a couple actually admitted it and had incidences where a replacement was needed.

Most do not have insurance for their smartphones. In fact, most would refuse to pay the standard monthly amount asked for insurance. A consensus thinks the price is too high to start with and that it is a sham and one ends up paying more than necessary to replace the phone overall anyways.

Strikingly many geocachers are playing the game of chance stating that they are very careful with their smartphones and have never had an incident. Therefore it is not needed... Interesting.

The level headed geocachers are out there and they utilize their hand held GPSr for the times that their smartphone may be in too much possible peril. To me that makes the most sense but this apparently is not widely the case and even less put into practice. Maybe I should put stock in the cell phone company stock after all.

What do you think?

I've actually damaged a smartphone and an old GPS on one geocaching trip! My old iphone had insurance on it, but when it came time to pay the insurance, I was AMAZED at the fee (at least for the iphone).

I now have a Windowsphone, and I usually take it out for Park n' Grabs, because i like the map on it better than my GPS, and it cost way way less than my GPS. I do have insurance on it, and Geocaching has beat it up quit a bit (one of the speakers on the bottom doesn't work anymore after losing my grip on it while reaching for a cache). When I replace my windowsphone, I'll prolly move to an expensive Android smartphone and buy an Otterbox for it so less damage will occur!