Blown Away By My First - First To Find Cache!!! 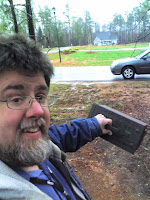 This particular cache has some very special meaning for me on several levels. To begin, this was my very first "FTF" or first to find. When you get one of these gives you some nice bragging rights in the Geocaching community. These caches can go on for years, have thousands of visitors but there is only one FTF! So when I saw the listing not to far from where I work and that no one has been there yet, I took an early lunch and drove over as fast as the rain would allow..

Finding the cache site was about as easy as you can get but that is the intention of the owner Bearkluttz. In fact as I was driving up, he was just leaving for somewhere. I called out if anyone has been here yet and he replied no that I was the first and to enjoy the cache. I thanked him and waved as he drove off. With the cache in sight I was ready to take the high honors. Unbeknownst to me the honor was more than I ever thought possible. 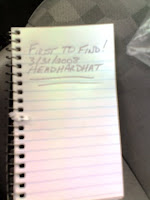 But first, time for those bragging rights. The cache site is very nicely done and is actually a cache in a cache. This provided some very nice extra protection for the cache itself and an ingenious way of keeping things extra dry. Again with the rain I can vouch for its effectiveness. I took the inside cache into my car so I would not damage anything with the rain. Once opened there was a slew of cool items, toys, log book and an unexpected surprise. One of the nicest FTF bags I think I will ever find. More on that in a moment.

I opened the logbook bag and stared at the blank pages.. Holy cow I thought, I really am the first. So I took out the handy dandy pen and printed in my HeadHardHat. Now how cool was that? I went into my backpack and stocked the new cache with one of my signature first aid kits, a screw driver set, usb cable, odometer and a Travel Bug. Once everything was put into place I made sure all was intact and closed up tight. Put the cache back into it's well place host and closed the lid for the next find. 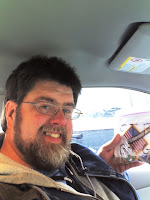 Finally sitting in my car, this now gave me time to examine the real prize. The FTF Bag left by Bearkluttz. I was expecting maybe a couple of cute goodies, toys or other trinkets. What I received was something totally unexpected and down right amazing. I looked at the bag for a moment and examined it's contents. "These can't possibly be real", I thought to myself. "Can't be."

Inside the plastic Ziploc bag was a Congratulatory message from Bearkluttz and what I can only think are some very personal items from his Navy past. Not just any items but real Navy memorabilia. Also inside was a heartfelt letter explaining each of the items. For example, the Silver Enlisted Surface Warfare Specialist (ESWS) breast insignia, which he earned in April of 2002. Then there was his Navy Achievement Medal that he earned from Operation Iraqi Freedom. I could not believe what I was seeing but there was more. He also include an American Flag patch which I love and two special items from his ship the USS Cape St. George. First was a UIM or Unit Identification Marker with the name of the Cape St. George sewn into a black arch. This is used for dress blues and working uniforms. The second is something I treasure the most, an actual USS Cape St. George ships coin. Holy cow it is amazing. 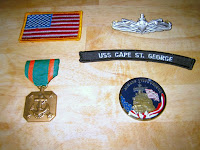 So I sat there looking at this actual historical treasure. Unable to think for a few minutes. What did come to mind is this needs to be preserved in a place of honor. I am not exactly sure how it is going to be displayed but whatever I come up with it will be done right.

Bearkluttz I can tell you this. These items which I would think have an incredible personal attachment will be "honored" in a very special way. There is a story behind them and I would love to learn more. So if you read this please email me, I want to thank you in person for this amazing gift.