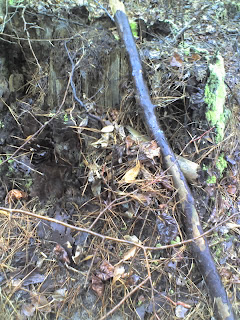 Well let's see, It has been one of the rainiest weekends that I can remember in Raleigh, NC within the last year. Rained both days, not a heavy one mind you but that dreary misty rain that saturates everything. It doesn't help that it dropped from 83 degrees on Friday to 45 for yesterday and today.. Yuck! So instead of sitting in front of the television all weekend, I decided to take the plunge and start my first cache..

Now if there is one word that can describe me (not a dirty word mind you) it would be excessive. If I am interested in doing anything I do it in spades. If I get bored with it after three or so months and move on fine but if I like it? Look out! So when it comes to starting my first cache I just could not put a simple micro somewhere and feel like I did something. Instead I set my sights a little higher and decided to do a series of caches.

Nothing overly crazy but I wanted it to be multi functional. First off I like Travel Bugs, those interesting little hitch hikers with the dog tags. I have one which is a mantis hanging from my windshield visor. Took the little guy through North Carolina to Virginia, West Virginia, Ohio and Michigan taking pictures the whole way. Wanted to leave him there but couldn't put him in a cold ammo box somewhere in the frozen tundra so I brought him all the way back. Never thought I would get hooked on them. But I digress.....

Anyways, I wanted to start a Travel Bug Hotel. What they are usually is a slightly larger container like an ammo box. This cache specializes with the dropping off and picking up of travel bugs. You can find them usually near freeways or other busy sections of town. This was just what I wanted so cache #1 now called "Getting the Lowe Down #1 - TB Hotel" will be such a cache. It is a relatively easy find and just about anyone can keep TB's on the fast track by using it.

That sounded great and would have been a fine first cache but again I wanted more. "Why not make a SECRET CACHE?", I thought to myself. One that would be a true treasure chest find. Great, I would take one of my smaller ammo boxes for the hotel and hide it in a pretty obvious spot.. Then in that cache put half of the coords to the secret cache. Then put a smaller micro cache somewhere in walking distance that would give the second half of the coords. Sounded like a plan to me.. There would be a 3 for 3 set of finds if people wanted to do it.. If they just wanted to hit #1 the TB Hotel then great, then again a really good Secret Cache is enticing, especially if it is all within walking distance. So all day today that is what I put together.

If you look at yesterday's post you can see the reconditioning of the ammo boxes I bought Saturday. Once dry and properly labelled they were ready for stocking. I had already scoped out the area I wanted to hide the caches. It is a cool little park like area with a small pond and a woods surrounding it.

On one side I put #1 for an easy find. Inside the container was placed three different TB's and a geocoin, a 10 piece screwdriver, two screw driver set, two first aid kits, bungee cords, safety glasses and odometers. Not shabby at all I think. Also made a "First To Find" certificate ta boot. Nice log book and pen completed the ensemble. The other side I put #2 the micro in a rather cool spot if I do say so myself. It basically just included a mini logbook. Not much room in those but if someone finds it adds a smiley to their totals. #3 was placed somewhere else and hidden very well. I wanted the fun of the hunt for buried treasure with this, now that the cacher has the full set of coords they can continue with their quest. I won't go into the details of the larger container but it is pretty special and it is my hope that whoever finds it will enjoy the results.

So there it is and the name of this soon to be published series is called "Getting the Lowe Down". Coming to a cache listing near you. It was a bit soggy today walking around in that misty rain. Digging up pine needles and busted twigs to help hide the camouflaged caches but to me it was all worth it. My wife thinks I've gone over the deep end but she knows this is keeping me out of the bars and it is helping my health with all the walking around. Heck she went with me yesterday to pick up the four contenders we are going to use to make our own travel bugs. Once made and registered I can guarantee their first stop will be the TB Hotel and then who knows where they will end up...?