Cache on a Rope 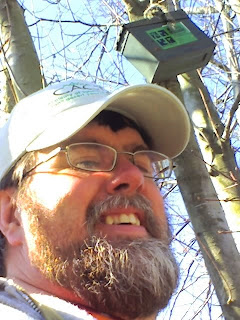 I have had several people ask me about the photo of myself and a cache on a rope.

Shown here is me in my most observant best. I took out my Etrex and did the basic dog chasing his tail circular moment for about five minutes looking for where this darn cache could be.
Then when I realized that I looked everywhere except up, I looked. Now in my defence the cache was actual another 15 feet higher then pictured but it did give me that real "Doh" feeling when I realized the location.
I can imagine it must really be hidden well when the trees are all leafed out.
Name of the cache is "End of the line " and it is in Ohio off of I-77 south of Canton. For some reason this particular cache does not seem to get many hits and I left a very cool Blue Dragon TB in it hoping it would get discovered. So if you are in the neighborhood.....
Posted by Unknown at 5:29 AM