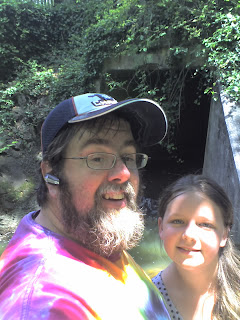 Well some times you get days like today. Went out with daughter Geoness to take our first swipe at the Smithfield, NC area and I cannot stress enough how bad it was. I have never seen anything like it.

Granted this was the first time I just loaded my Garmin with about 100 caches for the area and did not load up my palm with the cache info and cache hints. Since we were going for numbers I was not hitting anything more than a two in difficulty. No biggie right? What I didn't see were all the other DNFs for each of the tries we went for. What a shame. Long story short we had only three finds for the first 13 attempts. Very frustrating but it was the first time we had hit such a string of a blatant lack of maintenance.

By the time we hit the tenth DNF we decided to leave and hit a richer cache area and had no problems there. Sorry folks but this was a waste of $4.00 a gallon gas. Won't be going back there till we see the caches being better taken care of. 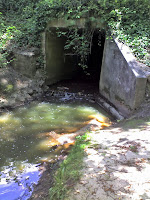 Almost forgot bumped into USAFSP and the rest of Team P who also were hitting dry spots in the Smithfield area. In fact the cache we were both going for turned up to be a DNF for both of us. Usafsp was telling me how he had gone as far as found a muggled cache, actually replaced the cache, gave the owner the new information and coords then the owner did not even bother to redo the coords. Tacky.

Team P are all such a nice family and Geoness and I had a great time talking to them. I wish them the very best in their Geo pursuits. Hopefully we can meet up again at a local event.

Hope Smithfield can get the caches cleaned up. It's a nice little town but gas is just too expensive for such a hit and miss place.

I'm not sure which Garmin you are using, but if you are using the 60Cx or 60CSx, you can have cache page info right inside your GPSr! Checkout this link:

Will have to see if it plays nice with the Etrex Vista (use nuvi for the car).

Currently I use Plucker to load all my caches into my palm. With 4gig cards is can hold all I need and is a rather nice interface. The killer is the amount of time it takes to load it. For about 2000 caches you leave it running in when you go to bed and hope it completes by morning. Sigh.

That particular day we decided to go at the spur of the moment so all I had time for was loading the nuvi with the new gpx files and away we went. Will think twice going into a new area next time.

When using the Palm platform you should look at "CacheMate" for the Palm. It is less than $10 and does a fantastic job for paperless caching. Just "Google" CacheMate!