Behind The Scenes: Geocaching World - Spills, Chills and Thrills 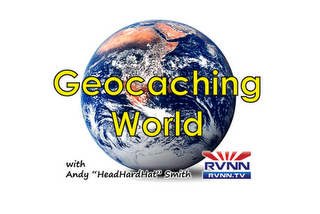 Well my wondrous and amazing viewers we had all sorts of spills, chills and thrills with last nights recording of Geocaching World (RVNN.tv). So much went on it is hard for me to put it all in a few terse yet meaningful contexts. So lets start at the beginning.

Dave 'Debaere' DeBaeremaeker a good friend of mine and fellow geocacher was supposed to be our special guest on the show. That was until I received a chilling text from his wife telling me that Dave flipped his bike and was heading for the hospital! Hokey smokes Bullwinkle, I was actually stunned for a few moments. First off I didn't know if the bike meant bicycle or motorcycle. Thankfully later on I found out it was a bicycle. Next how bad was poor Dave? Here it was an hour before the show and not only was I concerned about my friend I also had to scramble to get enough content to replace what we were going to discuss with Dave. Stay Calm, Don't Panic.

Thankfully about 15 minutes later or so I received a phone call from Dave apologizing for not being able to do the show. I was so relieved that he was okay the rest didn't matter. Apparently my peddling pal was heading downhill and tried to stop by using more front brake than back. Resulting in some hurt ribs and I can imagine a bunch of other hurts. At least his injuries were not severe. Okay we can always reschedule now I can concentration on the show.

Luckily for me when I created the show notes for this episode it had a lot of filler content. Meaning when we have people on the show I always have a lot of extra stuff to talk about just incase the interview runs quick. A reassuring text from my cohort in crime Courtney Wallin let me know we were covered and to just proceed normally.  Phew!

Okay so the show itself went great even though we missed our Geocaching guest. We started with an explanation of what happened to Dave and then proceeded with a really great discussion about suggested topics from our Geocaching audience. We started with a talk about a recent Geocaching based bomb scare, followed by how Geocaching has an environmental footprint and is it harmful, plus several other topics. The chat room and handouts were buzzing with comments, suggestions and insights as usual. Must say, the show is just not the same without you there.

The highlight of the show was of course the announcement of the Chris Mackey Limited edition book. We had tons of entries that were sent in and many were double entries when having our Geocaching World logo or words included.

The winner who was chosen by drawing from one of my ammo box Geocaches was VICTORIA NICHOLS! We will be sending her the book this week - Congratulations. Victoria actually joined us in the Google+ hangout just after the show ended and didn't even realize she had won. That was so cool being able to tell her in person.
All in all the show was heavily discussed in content and opens up a bunch of other discussions as well. I highly recommend you watch it when it becomes available in the next day or so.

We record Geocaching World (RVNN.tv) every Tuesday night at 6:30pm ET. You can be part of our live audience by going into our Ustream Chatroom where you can see our live feed of the show as we record and/or you can join our Google + hangout by circling +Andrew Smith.

See you next week.