Adoption Cache Cleanup or My Afternoon in the Swamp 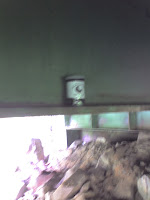 Had a great afternoon today. Started out by driving over to Fuquay-Varina, NC with the hopes of finding and if need be repairing some newly adopting caches.
My first stop was a bridge hide and before you start writing to me of the evils of such hides it is in the middle of nowhere. I too have seen the news with irresponsible hides in plain site of muggles under public bridges. For those who do this I can only remark " DON'T ! ". With this day and age of potential terrorism that strategy is pure stupidity. This hide however is on a back road with nobody for miles. The cache itself has been missing for months and I had already known it needed replacing. Since it was categorized as a micro I decided to go with something simple yet trustworthy. So my cache of choice was a 35mm canister with a magnet hold. I feel it will do the job and still give a slight challenge for those who seek it's smiley. 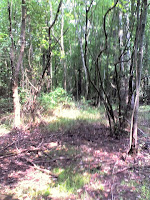 Next up was a cache that I originally did not feel comfortable going for earlier this year. It's called The Air In the Swamp is Terrible and at the time the thought of going deep into an unknown swamp by myself just did not set right. It is set near Terrible Creek and the satellite shots I had observed in Google Earth showed extreme swamp terrain nearby and I was just not ready for that yet. Fortunately for me I did go for it's sister cache The Swamp King and that was enough swampish fun for me.
Now that I have cached for a while I was actually looking forward to this afternoon hike. After parking in a convenient spot near the trail head I put on my calf high boots, donned my baseball hat, took my favorite walking stick then trotted towards the little micro in a swamp. My GPS had a fresh set of batteries and I made sure that tracking was turned on. Which was a good thing because after a few hundred feet in the trail turned into pure bushwhacking. The ground was moist but not nearly as bad as I had anticipated. There were relatively few bugs shy of a dragonfly or an occasional mosquito. There were however a huge amount of spider webs everywhere and I ended up using my walking stick more like a light saber than for prodding the ground. The smell of the area was dank and the humidity seemed higher than by my car even though I did not see all that much open water. It was amazingly quiet and I could hear all sorts of wildlife around me. To my left and above my head I heard a distinctive "who-who-whooooooo" which repeated several times. Then in the distance it was repeated again. For an instant I had the privilege of spotting a Great Horned Owl in the upper branches of a tree. Apparently there were two of them and they were calling to each other. Very cool.
I continued on and eventually walked up to ground zero. I looked everywhere and after about an hour I made the decision to simply replace the cache. While still at the original coordinates I found an acceptable cache host and placed the micro in it's new home. For a moment I thought of actually putting a larger cache at this site but only six people have gone for it so far. If more interest is generated I may put one out there that rivals Swamp King. We shall see. 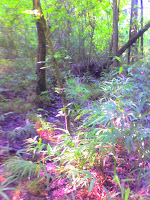 Speaking of The Swamp King, on the way back to my car I stopped off to check on this very cool cache. As the royal keeper of the swamp it is in perfect shape and ready for it's next finder. I really hope they have as much fun looking for these caches as I had today. What a grand little adventure and something I can add to my treasure trove of memories.
I must admit as I exited the canopy of trees and felt the pathways open up there was a moment of relief. I absolutely love taking long walks in the woods but there really is a difference when you walk in a swamp. You have to be much more cautious where you walk, where you put your hands and taking that extra step of safety. Not because there is something waiting to get you around every corner. I know there are snakes, spiders and other creepy crawlies out there. You just have to use some common sense and poke those unknown areas with a stick. Above all you also need to get past your fears and do some honest to goodness exploring. How many times do we get to do that now-a-days? Enjoy these moments that caching provides to us. They will be the stories we tell our grandchildren and the memories that will help to keep us young.