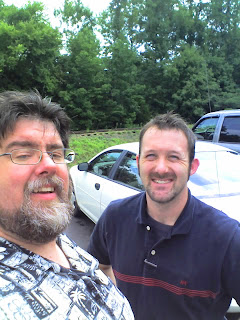 Okay all you conspiracy theory people out there. Better sharpen your pencils because I finally was able to meet up with TimMcGrawlookalike today.

Conspiracy you say? Yes we've heard the stifled whispers in the hallways, the finger pointing from the other side of the room and those off hour phone calls when fellow cachers ask, "What gives?". Okay maybe not the finger pointing so much but I was recently asked if TimMcGrawlookalike and I had an ongoing plan to gain the most FTFs by feeding off each other's new caches. I can say with great certainty that we do not and it just seems that way. You see up in the Oxford, NC area there are not a whole lot of regulars. Much to TMGL's and my amazement once either one of us put out a cache it tends to just sit there for a day or three. When we finally go to work we will pick them up but for the most part they are not picked up as quickly as other areas. The pattern is usually the same, he would put a cache and I would go find it. Then I would put out a cache then he would be the FTF.
This has happened so often that people apparently noticed. That’s okay I love FTFs and will gladly race for whoever places caches along my way to work and back.

What gets me pumped though is when someone else puts out a new cache, then it really gets interesting. There are four regulars in the Oxford area when it comes to Geocaching. There is TMGL and I who get up really early for work so that seems to give us a slight advantage. Then comes Ringer2410 an Oxford native and a creative hider in his own right. Last but not even close to least is mobettamerf. Now I am pretty sure that mobettamerf sleeps with an early warning system under her pillow when a new cache gets published. Because there are times she will go out in the middle of the night to get a FTF. TimMcGrawlookalike is in law enforcement so he has all sorts of cool gadgets like night vision goggles and stuff. I would swear he has a bat cave nearby but I am still looking into that. On that rare occasion the planets are all in a line a real race happens.

There have been times we all have missed each other by minutes. Not hours mind you but minutes. There is nothing like a look on a FTF hunter when they see you waving goodbye in the rear view mirror and they just missed the prize. Muhahahaha, sorry I digress. This happened today as a matter of fact, I put out a new cache yesterday called Lunch Bucket #1: Butner Snacker. It published and both TMGL and mobettamerf went for it first thing. I won’t say who beat who but she must have been book’n from home. Apparently the other unfortunate cacher missed it by 45 minutes! Man I love this sport, hobby, obsession… That’s how it goes in the world of caching. 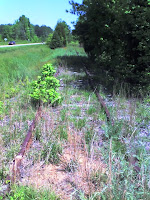 Well that was a long way to go for the main reason I wrote this article today. After emailing for such a long time I really wanted to meet up with TMCL since we never actually met face to face before. Unfortunately we did not have a lot of lunch time to spare so we decided to meet at one of my favorite Oxford hides, Playing on the Train Tracks #6. There we took a little stroll to see if it was still in good shape or not. While trying to avoid the tall weeds and falling off of a railroad bridge we were able to talk about a host of other caching adventures and ideas. We confirmed POTT #6 was ok and it was put back in its happy hiding spot. After completing our hike there was just enough time to trade some of our geocoins. TMCL liked one of my pathtag Sherpa coins and I went for a Horsegeeks personal coin and a Coinfest Event Coin from last year. Very cool.

Pressed for time we had to end our conversation but I don’t think it will be too long before we see each other again on the caching trail. TimMcGrawlookalike really gives the impression of being a top notch guy and I hope we can do some caching together sometime soon instead of going for that elusive FTF. Not that there is any fun it that!
Posted by Unknown at 10:10 AM