Help Keep The Spirit Alive By Adopting A Cache 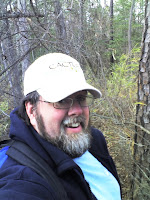 It's so true when they say your first 100 caches are the most fun, enjoy the adventure and the secrets they bestow you. I personally started geocaching in early 2008 and I still can feel the incredible newness of it all. The anticipation of the hunt and the promise of the mystery it would reveal. Caching pushed every one of my geek buttons and I could not wait for what lie ahead. Though in hind sight, I did have to get past a phobia or two.

My second caching find ever was a Hippopotamama cache known as “Welcome To Wake 8”. It was a grand total of two miles from my house and partially in a wooded area. At the time it might as well have been buried treasure stashed deep in an impenetrable forest. My imagination ran wild as I chased the arrow on my GPS screen into the darkening seclusion of trees. “There could be things out there”, I thought as the first bit of pine needles crunched under my feet. Growing up in Michigan the worse I had to worry about was an enraged squirrel or maybe a very rare pygmy rattler but nothing really serious. Here in North Carolina there are tons of things just waiting to make their presence known and I read about each and every one of them. Snakes, spiders, ticks – oh my, but even those were not going to keep me from finding my goal. So ever so carefully I headed towards ground zero. A rustle of leaves to my left gave me a start as a banded skink dashed away with it's turquoise blue tail flashing in a patch of sun. “Whew, that was close”, thought I as I learned to watch the GPS and my direction at the same time. Moments later I was standing at ground zero and remembering in my head about the description of the cache and of course the hint. Looking behind trees and around stumps then before my widening 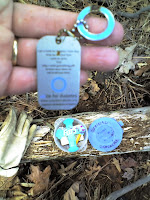 eyes there it was – the cache. Sure it was just a blue Tupperware lock top but at the time to me it was my treasure find. Excitedly I wrote my name into the logbook. Making sure it was dated so everyone could see that I was actually there. Adding to my delight was a couple of swag trinkets that I was able to trade for and the extra bonus of my first travel bug find, JACKPOT! Holy cow this was cool and there it was a Diabetes Travel Bug for me to record on the website. Pictures, must take some pictures, quickly I snapped some off from the digital camera I remembered to bring. With it now time for me to leave I carefully made sure everything was put back in place, locked tight and hidden just as I found it. How magical is an experience like that? Though now with hundreds of caches under my belt I can hit a dozen spots in a shot but they rarely have the same “Umph!” like the first ones gave me.

So why the trip down memory lane? What is so important to me now after I have already recorded my smiley? A month or so back a host of caches in my area went up for adoption. The reason for it is becoming more common place. With the price of gas and the abilities of the owner to keep a cache in shape changes over time. When these particular caches became available I was glad to give a hand and adopt some. It was even more meaningful to me when I saw Welcome to Wake 8 was one of them.

The adoption process is extremely easy. The cache owner puts the cache up for adoption by telling geocaching.com the name of the cache and who they wish to adopt it. An email is sent to the adopted owner and they simply accept the offer; ownership is then transferred. Once ownership is in your name it is up to you to find the cache and make sure it is in proper shape. Several of my new adoptions needed maintenance including WTW8. According to the logs the cache was soaked and the items inside were pretty much mush. This was not a problem for me mainly for the surplus of caches I keep in the back of my car. I remembered the approximate size of WTW8 and had a very nice lock 'n lock container that could be used if needed. Time to take a quick road trip up the street. 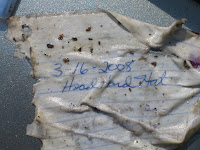 Oh how things change, back when I started caching this adventure took me into the woods of North Carolina for the first time. Now after being in countless woods, swamps and forests within five states I didn't give a second thought as I stepped on the now familiar path. No need for the GPS really though the terrain was different in the late summer as to early Spring. Using my tracking pole to prod around the cache area I heard the resounding sound of my pole bouncing off of plastic. “Ah, there it is”, I said as I picked up my old treasure. Looking down I could not help but notice how small it now seemed to me. It was beat up quite a bit with a hole in the top and covered in mud. Inside was the remains of a homemade cross and the logbook in soggy tatters. I drained out as much water as I could and put the container in my backpack. Then replaced everything with the new cache I had brought with me. “Back in business”, I said as the last coverings were put in place and I walked back to my car then on towards home. Hopefully something could be salvaged from this trusty cache, but from first glance I pretty much thought it would be a total loss. Yet one thing I have learned and that is these caches are always full of surprises. 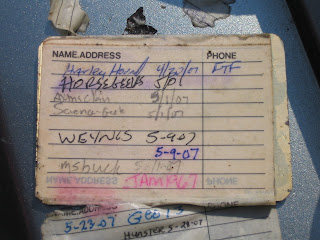 After getting home and pulling out all of my geo-stuff from the trunk of my car I started a little recovery project in the hopes to save some of the original log book. Welcome to Wake 8 had been placed back in late April of 2007 and if there was any chance of getting a few pictures of the logs then some of it's history could be saved. This was not an easy task, the log book consisted of two golden magnets as covers which held the log sheets together. A great idea but unfortunately when completely wet all of the paper sheets smooshed together. Surprisingly I was able to find my original signature pretty much in tact, date and all. The rest of the log book was unrecognizable except when I pealed away to the very first sheet. There was the buried treasure I was looking for. It showed the FTF who happened to be harley_hound, followed by horsegeeks, akinsclan, science_geek, we4ncs, geo13, hunster and a few more. I quickly snapped some pictures of the log book. I am glad I did that when I did for as the hot sun dried the sheets they quickly darkened and became so brittle they simply disintegrated. Fortunately I had what I wanted and I cleaned up the cache and the few trinkets that survived. I am happy to report that the first owner of the cache is getting the photos I had taken and it is my hope they enjoy this little keep sake to remember it by. 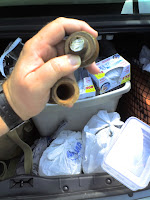 Currently I am still going down the list of adopted caches. There are another handful which need maintenance but I am getting to them. As I replace or repair each of them I have found a comfort knowing that I am helping to keep someone's essence alive. I realize that a lot of thought and down right creativity goes into cache placement and preserving it for others to enjoy means something to me and the original owner. For mine in particular the owner referred to them as their babies. To be looked after and maintained which only shows the attachment they can bring. Who am I to do any less than show the same respect I would want if I ever had to leave my caches in someone else's hands? To me as a member of the caching community it is important to help keep the spirit alive.

I appreciate the encouragement related to adopting. I am from Greensboro, NC but live overseas (in Ecuador). I will be coming home for about six months next July and would like to put some caches out. If others will adopt them when I come back to Ecuador, then I might do it. Sumajman