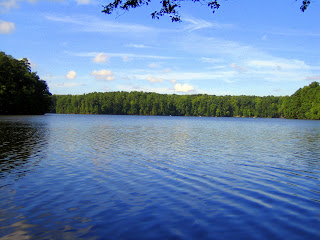 What a great day daughter Geoness and I had on Saturday. We fully intended to blow our current number of finds record off the map. Our intentions were straight forward, get as many as we can and the sky was the limit. Go - Go - Go nothing was going to slow us down.

The plan for the day was sure simple enough. I created my cache raid list for the day with an over zealous one hundred possible caches to choose from. We would start about 9:00 am and go until sunset. Even started off with a nice breakfast then packed a picnic style lunch so we didn't have to stop anywhere to eat. Finished off with some munchies and a cooler full of water. Ready - Set - Go! Voom...
I had a feeling by our very first cache that it would set the over all pace for the day. We started by doing some hiking on the available greenways in southeast Cary, NC. We parked near Johnson Lake Park and was just going to hit one or two nearby caches then move on. It was so scenic and the weather was perfect for taking a long stroll. There were people everywhere and you can tell that this was one of the first times after a long hot summer that people could come out into the pine scented air and really enjoy it. Geoness went nuts with the camera and very quickly the fervor of finding the most caches possible quickly turned into "would you look at that" and "stand over there so I can take a picture". Did I mention the weather was perfect out? We mozied to our first cache which happened to be an ammo box under a log. With the trees being rather thick I found myself quickly playing the ever popular follow the bouncing arrow game. Walking off the path and bushwhacking towards what I thought would be a logical place for the cache I hear in the distance, "Found It".
"Doh!", I squeak from under my breath. "Your kidding right?", I hear giggles so this can't be good.
"Nope, I have it in my hands", my daughter says with that nanner-nanner pre-teen tone. 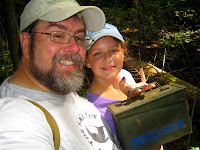 Sure enough there was the ammo box just asking to be investigated. We made quick work of signing the log and checking for any worth while treasures then the green painted cache was put back in it's hiding spot and we were back on the trails.

Before I could ask if Miss Geoness wanted to go back to the car she asks me if there were any other caches we could find. Because I was going by the Cache Raid list I had not done much research on nearby caches but it was worth a little walking to the next one. I mean how much time could another cache take or another and another... before we knew it we ended up picking up a few more before we actually did stop.
**Note - because there are so many caches there we will be going back to Johnson Lake Park real soon, would love to see it in the fall. 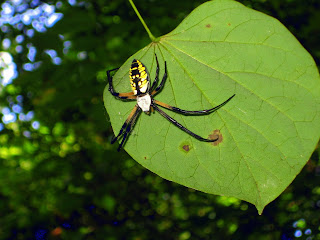 Eventually we made it to the car and continued on to our next cache on the list. I didn't realize it at the time but we ended up on the north side of Johnson Lake. We found a spot in a nearby parking lot and took a shortcut to the greenway in hopes of finding a couple of Horsegeeks caches. The view at this end of the park was no less spectacular with the lush greenery and shining water through the trees. We walked for about a quarter of a mile and came up to a very nice boardwalk that went over a more swampy like terrain. We had found our next cache location and after seeing the ground cover I told Geoness to hang back a bit and let me find this one. She agreed and I started up a small hill in the direction of the cache. I was instantly startled when I realized that I had walked right smack into an Orb Spider web. There is not too many things that will get your blood pumping more than looking eye to eye with such a large spider. Fortunately I had hit the lower part of the web first and the beautifully yellow, white and black colored beastie made it up to a large leaf. A bit shaken I continued my journey towards the suspected cache site. My suspicions were confirmed as I gazed down at the medium sized lock 'n lock box. I could feel the hairs on the back of my neck stand up when I realized what I would need to do next. You see the cache was placed inside a hole that two twin trees had made between them. The hole was about a foot deep and another foot wide. Perfect spot for a snake den. Leave it to me to go on the one hike in a wooded area without my trusty backpack. This would have been a perfect time to use my grabber tool which was, say it with me now, in said back pack. Instead I did the next best thing and prodded the hole with my walking stick and after being mostly sure nothing was in there I held my breath and reached.

My head instantly wandered to the visions of a fellow cacher who recently was bit by a copperhead. This of course caused me to miss the cache at first grab and actually took a couple of heart pounding tries before I managed to get the prize. Much to my relief I brought the cache back down the hill to my daughter who commented how much I was sweating. I smiled and said that it must be getting hot out and we can stop for a liquid refreshment break soon. After signing the log for this thrill filled cache I was happy to put it back for the next finder and move on. 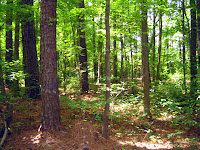 The rest of the day consisted of several other green way hikes. I think we must have walked about five miles overall. There were several series that were fun including a lot of bison tube hunts. By the time it was getting dark we both were pretty bushed and we ended up with 18 finds for the day. Not the biggest amount when it comes to the numbers game but when it comes to the amount of quality time that the two of us shared it was priceless.
Posted by Unknown at 5:01 AM