Buying A Camera For A Twelve Year Old Girl 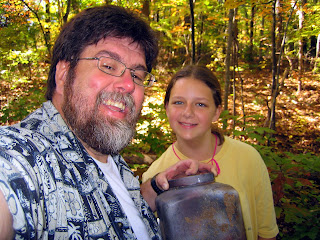 My daughter Geoness by far is the better half of our Geocaching team. When we are out on the trail we have a serious competition for who finds the cache first. You see, that gives the winner instant bragging rights and the honor of signing the logbook first. She's currently twelve and has no problem telling people that she is a “pre-teen”. I still am not sure if that is to show the importance of her age or is a subliminal warning of her possible moods and just to deal with it. Ahhh, teenagers.
One of her joys while caching is to photograph our outdoor adventures. Sometimes it is to document an event we attended and others to take good photos for my blogs. Over time I have noticed that photography has really become a hobby for her and she has asked for a camera of her own when Christmas comes around. Personally, I couldn’t think of a better way of encouraging her new love for the lens.
With that being said, I sat down and considered what would the best camera be for her. There were several key factors I would like to share so let’s start with the basics.
Budget - My budget is the first consideration. I would love to say that I could drop $500 into a child’s hands and say “here go for it”, ummm, not happening. I would say something closer to $100 for a good camera would be more my speed and if I can get it on sale, all the better. Let’s face it with the economy the way it is I can use all the help I can get.
Next, Usability – No gizmo of any kind is worth the amount of wasted time it takes for the user to figure out how use it. In other words if you are getting frustrated just trying to turn the dang thing on you may have purchased something that will most likely be going back to the store or collecting dust in a corner somewhere. It’s for a twelve year old girl that wouldn’t know an F-Stop if it came up and said “hi”. So Point and Shoot is the way to go which means everything is as automatic as possible. Now the worse she is going to have to worry about is getting the camera strap caught in the shot.
Finally, Durability – When you Geocache you are outside. As in outdoors where there are ponds, lakes, streams, mud and rain. My daughter tries her best to not bang around the equipment but I have caught her many times unknowingly swinging the camera by the strap. Electronics and sudden jolts do not go well together and come to think of it, neither does moisture. So whatever I decide on has to be resistant to wetness and some attempt at surviving a drop or six.
As for the rest of the considerations like extra features of the camera itself; they are pretty much secondary. With a lower end camera the best you are going to get is a modest megapixel strength which is the overall clarity of the picture itself, a fair flash and a standard battery. Drop in a 2 gig memory card and the battery is going to run out before you run out of memory. The average would be about 160 photos which should be more than enough for a day’s worth of geocaching.
I can also see a big benefit for getting a digital camera is there is no film. So Geoness can make all the not-so-good shots she wants. It doesn’t cost anything like the old 35mm days when you bought 24 exposures per roll and you get what you get. Now all you do is hook up the USB cable to the computer, download them and you’re done. It’s that easy.
So even though I have not figured out exactly which camera I am going to get, I think this will be the best game plan to my final conclusion. After considering my budget, camera usability, durability and I am sure the color will have something to do with it. It should be a pretty quick decision and she will be out in the woods taking photos for our next computer background or blog article in no time.
Posted by Unknown at 4:05 PM

Consider a cell phone. The new models have very decent cameras. And if web & GPS enabled, they combine a lot of other gear. Cell phone, PDA, camera, GPSr. They even have transponders on them so you know where your daughter is all the time.

for a budget, I'm a big fan of the Nikon point and shoot models. My daughter has one, and it's super easy to use, and takes decent pics. I love that it uses regular AAs too (no specialized battery that dies at inopportune times). Just something to keep in mind.

Just don't get her an Olympus Stylus 830...I'm still trying to figure out how to use that sucker.

Depending what you are looking for and what you end up deciding to spend, drop me an e-mail. Being I do a lot of photography -- both professionally and for fun -- I've used the spectrum of cameras (and still use the big and the small).

That being said, I think it's great she's interesting in photography. It's an awesome hobby.

I dabble in photograpy. Okay, I dabble a bit more than most. Having sold a number of cameras over the years, my suggestion for a simple point and shoot based on what I read is either a Kodak or a Nikon. You'll get better quality with a Nikon, but based on ease of use, both are good. Most bottom line cameras these days don't have a low enough megapixal rating to really be of any concern. Just be warned that you might want to range from $100 - $150. You can find things under $100, but sometimes, they are off brand cameras. Also, memory cards aren't that big a deal for price anymore. You can easily find a 2 gig card for under $20, sometimes even a 4 gig if you can find good deals. Wait till Thanksgiving and You'll have now problem finding excellent deals on memory cards. You might even get two or three 2-4 gig cards for under $30.

Pass on any questions if you'd, as I've heard most of the shopper questions before. And good luck Geoness, it can be a lot of fun when you get those cool bragging shots, just like when you beat dad to the cache.

My Olympus has never let me down and lithium batteries instead of AAs is so much nicer.

Kodak - EasyShare 7.0MP Digital Camera - Silver is what I am going for my daughter and about $80.00