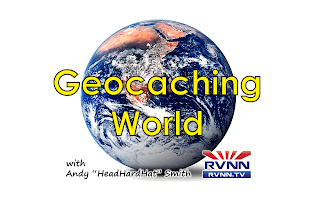 On my way home from my computer based employment I had RVNN LIVE streaming through my Android phone. It was kind of humorous to me when Creative Director Dave Dufour was talking with Managing Director Andy McCaskey and letting the viewing audience know they were on their own today. Apparently Producer Courtney Wallin was out for the day and Dave would have to do all the switching. Now on a Tuesday that was not directly impacting to me because Geocaching World is normally recorded on Thrusdays. The issue was due to some scheduling issues RVNN.tv asked me to tape tonight instead of Thursday. Well goody.

It really isn't THAT bad when Courtney isn't at the helm. Though it is noticeably different and let's just say we really like it when Courtney is in but hey, it couldn't get worse - could it?

So setup time came around and my Skype session kicks off as usual. I expected to see Andy McCaskey smiling back at me when the video started but instead there was my friend Dave Dufour. Turns out that Andy had to leave as well so the entire production crew consisted of ... Dave Dufour. Hmmmm, this should be interesting. Poor Dave, not only did he have to do all the production switching but also be in front of the camera as well while we did the show and to top it off he had to stay behind the production board instead of being in the main studio like we normally do. Oh yeah, loads of fun.

Because the show was on a different night and we had to make the schedule change at the last minute neither of us really thought there would be that many people if at all in the chat room. WRONG it was filled up as usual and I was really pleased to see that. It's amazing how Twitter, Facebook, Google+ and word of mouth can get the message out. It was a really lively chat room and both Dave and I were struggling to keep up with the discussions going on and do the actual show. In fact in one part of the show I believe Dave made a funny comment on how he would rather just keep up with the chat room. What can I say we have a bunch of really great people there each and every week.

As far as the actual show goes I think it went fine. Since Dave had to switch between me on Skype and him behind the control board it looked more like a RVNN LIVE show than Geocaching World but hey you have to make due with what is presented to you. In short we did just fine.

The show generally turned out to be about FAQs for how to consider purchasing a GPSr unit. We were extremely thorough in the discussion and covered all the major aspects that you should consider before forking out some serious coin. During the show we gave out two really cool prizes. One was a very nice wrist bracelet from GeoSurvivalGear.com and an excellent Grand Canyon Benchmark geocoin from CoinsAndPins.com. Not to mention that the BRAZOS Walking Stick giveaway has been extended to next week so you now have until October 26th, 2011 to get your entries in and we will have the drawing live on the show on October 27th, 2011.

So it turned out to be another great Meet and Greet episode of Geocaching World despite Dave losing his mind doing basically everything production wise. The chat room was awesome as usual and I had my usual crazy fun as well. A fun night all way round. Be sure to see the entire episode as it comes out in the next few days. Also be sure to check out the other 20+ episodes ready to be viewed at your leisure on the RVNN.tv website or any distributors like iTunes, the Tech Podcast and so many more.

Geocaching World is recorded LIVE each and every week on Thursday at 6:30pm EST. We meet up in the chat room here: www.ustream.tv/channel/rvnn-live.

See you next week. -HHH

Please don't forget to visit our GeoSnippits Geocaching Tutorial Videos Website at
http://www.geosnippits.com
Posted by Unknown at 5:27 AM