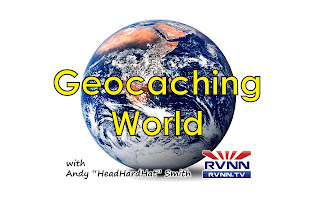 One of the advantages of writing my Behind the Scenes posts for Geocaching World (RVNN.tv) is usually I can replay the show right away (because it gets recorded) and I can then type while watching so I don't miss anything. Welllll, the show was recorded on RVNN.tv's side so you will get to see it early next week but it didn't get recorded on the Ustream side. So I am going to have to wing it. Here goes.

Had a really jam packed show last night with our special guest Michael Weiner from geocaching team TeamDotOne. We asked Michael to come on because our show was about Puzzle Geocaches. TeamDotOne has over 9000 finds to their credit with a bunch of them being Puzzles. In fact they had just traveled that day from Ohio to Arizona to complete several puzzle series and power trails.

Speaking of power trails, a large portion of discussion with Michael discussed power trails. Creative Director, Dave Dufour was intrigued by the fact that a geocacher could obtain the number of geocaching finds from a power trail in one day. Michael went on to explain that they planned on doing the Route 66 power trail and get over 800 geocaches in a single day. Was neat to see Dave light up like that with those types of geocaching prospects.

After we finished out Meet and Greet talk with Michael we gave away two prizes from one of our Cache Stash sponsors CoinsAndPins.com.  The first was a top end Lanyard and the second was a really nice Angel geocoin.

During tonight's episode we officially kicked off the Brazos Walking Sticks Giveaway contest where any of our Geocaching World viewers can enter to win one of Brazos "Traveler" Walking Sticks. Details if you go here:
http://headhardhat-geocache.blogspot.com/2011/10/get-your-geocaching-world-signs-ready.html.
The contest goes from now until the end of day October 18th. The drawing will be done live on our show October 19th, 2011. So get your entry in soon!

Oh yeah, we had a theme to tonight's show which was Puzzle Geocaches. We discussed the two basic types which are either the ones where you have to figure out the coordinates to find the geocache or once you found it you had to get the logbook out. Tons of information but you will have to see the entire episode to get it all!

Again a packed show with a full chat room of geocachers and a whole lot of fun throughout. Again the show should be released to iTunes and all our distributors early next week. Stay tuned!

You can join us each and every week as we record Geocaching World on Thursdays at 6:30pm EST. We meet up in the chat room here: www.ustream.tv/channel/rvnn-live


If you are a company who would like to participate with our Geocaching World Cache Stash Sponsorship Program and donate prizes for our show please email geocache@rvnn.tv for more details.

See you next week. -HHH

Please don't forget to visit our GeoSnippits Geocaching Tutorial Videos Website at
http://www.geosnippits.com
Posted by Unknown at 5:37 AM