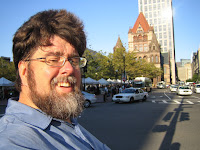 Welcome from beantown... I flew in this afternoon and instantly realized how much traffic is going to be a factor here. Boston has an awful lot of it. I am definitely going to be doing some caching tomorrow but I do not think it will be as much as I first thought. The forecast is not looking too great for Thursday so it's tomorrow or nothing and I do not want to go home without at least one. I have it all picked out and everything. About a mile and a half from the hotel is a likely candidate and it was just found today so I know it's there. It is big enough to hold travel bugs and I brought a couple with me. Should be fun. So even though I do not have a smiley to show for, I wanted to at least show you the more interesting photos of the day. Let me know what you think. 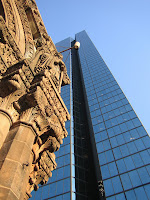 Boston is history, plain and simple. It is also is in constant growth and the combination of the two is fascinating to see when observed at the same time. For example the photo to the left shows a sentinel on an old church and the John Hancock Tower which watches over it. 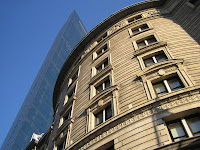 Here is another example of older architecture via Copley Square. Note the rounded corners of the building. 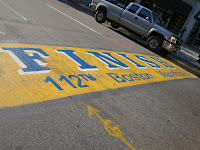 Talk about an unexpected find. This is a photograph I took of the actual Finish Line of the 112th Boston Marathon. Wonder what my time would have been... In days... Turns out that it was 2007 where over 20,000 runners finished here. What a cool thing to find wandering around this fascinating town.
Posted by Unknown at 3:10 PM