Trip To The North East = New States To Cache!!! 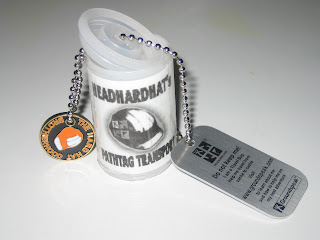 I can't wait to go on my trip next week. Work is having me go to one of our main offices in Piscataway, NJ for Monday and Tuesday then I am off to a Software Testing conference in Boston for the rest of the week.

Normally that would be a pleasant break of the normal work week and a chance for some down time. Now this gives me a chance to do some caching in a couple of new states.. Woo hoo!
Already pulled down the .gpx files for both areas and I really don't expect a whole lot of time to cache but I have to get at least a few. My boss said he want to see what what it was like so I might take him along as well. Should be fun.
Will send updates from my phone and then some real better quality pix later when I return.
Oh and if you are interested in what the photo is. This is a new concept that I came up with which is similar to the pathtag geocoin. Instead of one pathtag this Pathtag Transport can hold six or seven pathtags which can be traded as it goes from cache to cache. A moving collection as it were. Will see how it goes. At worse I put in five tags that will be recorded when people find them. Write to you soon, keep a candle burning NC.
Posted by Unknown at 9:45 AM

I'm in Ecuador but have a trip to Virginia and then back to my home in Greensboro. I'm planning on passing by the Oxford TB Hotel and seeing what is interested in going to South America. I hope to do that on next Thursday.