HHH's Lunchtime GotD - I Could Have Left But I Didn't - What to do when confronted by muggle management. 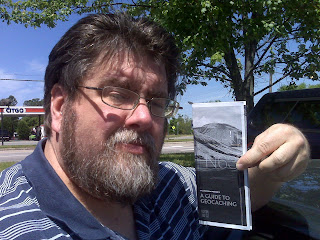 Here we go. A simple lunchtime geocache of the day could have turned real ugly, real fast.

The geocache was placed near a bus stop directly next to a store in a shopping mall. Easy enough, well not really because there was one of those metal fences that have all those crevices to hide a micro under. Long story short I pulled out my inspection mirror and started looking.

About five minutes into the hunt a man in a suit came over and asked what I was doing. He was the real twitchy type like he had too much caffeine. I didn't want to feed him a story because he was nervous enough so I told him that I was playing a game called geocaching. I explained that I was looking for a tiny container that held a log book. He seemed a bit vexed and started asking if I meant there are hidden containers on the property. I said a few but they should have permission to hide them there.


I could see where this was going and I assured him that there was nothing dangerous and when I find it I would show him what it looks like.

"Well I have to tell corporate if there is something hidden near the building" and off he scampered.

Now I could have just left like so many times you read in the news and if I did I would have left an obviously paranoid assistant manager wondering about this mysterious hidden container. Bad form. Instead I went to my car, pulled out a geocaching pamphlet and headed back. There waiting was the assistant and now the manager of the store.

I smiled, introduced myself and handed the manager the pamphlet. He looked it over, nodded and thanked me for discussing it. I then went back, found the geocache then asked if they wanted to see it. I knew things were okay because they didn't feel it necessary.

The moral of the story is don't flee the scene if confronted. To be completely honest there was a moment that I wanted to do just that. No one wants to do explain about something that could potentially be perceived as dangerous. Also in these days of anxious assistant managers, have some geocaching pamphlets with you at all times. It makes explaining so much easier.


Here is the link to those pamphlets on my blog:

Sent via BlackBerry by AT&T

Thanks for the informative post, HHH. i cannot, however, find the link to your pamphlet. Any help is appreciated.

Sure thing, the link is:

Thanks for the reminder! Sounds like you did the right thing :)

Here is my experience from this morning:

I was only there for like 60 seconds before a guy on a motorcycle pulled up and threatened to have me arrested. I told him the sidewalk was city property and he went into a screaming spin about how it was not. He told me he was going to call the cops which I told him was fine. He then told me to leave (guess he didn't have the guts to call the cops). Then took a picture of my car's plates and says he is going to have me arrested again. So anyway I will not be returning. Geocaching is so much fun sometimes.

Sorry to hear of your encounter. It is amazing how some people just have the issues they do. Please do not let a muggle or disgruntled human being shy you away from geocaching. These episodes are rare and not worth the thought the aggressor is trying to convey.

See you out on the trails.

Some muggles CRAVE the thrill of being "the person" who called the cops when they see something they deem "suspicious" ... i ran into one of those yesterday, and carrying the pamphlet REALLY helped.

HHH - no man, not even one who's head is spinning while he is telling me I am going to be arrested, will stop me from hitting 1000 in this next week. I doesn't get me down. Some are just........kill joys.

Joel - there was no giving this guy a pamphlet. His head was spinning too fast.

Thanks for wonderful and very helpful blog to sharing with us.
foot scrubber
Secret Stash Containers