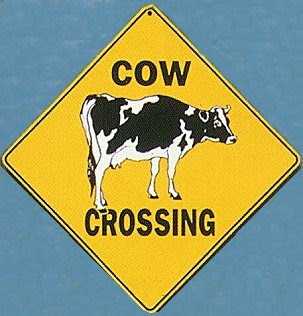 Ahh, the sweet time of the morning drive to work. The sun is starting to rise, a cool wind blows across your face as you cascade down a winding road, the smell of honeysuckle thick in the air, the sight in your rear view mirror of two squad cars with their lights on behind you??

Okay maybe it didn't happen quite that way. I was actually working on my next GeoCache series of which I have put a great deal of thought into. It will be called (when published) Barnyard Fun. Anyways, I was at #3 of four stops for this series and was parked quite legally on the side of the road. So there I sit writing down the coords when to my wondering eyes do appear not one but two squad cars pulling up with their lights on. I can't remember if I actually said anything out loud but in my mind came the thought, "Here we go...". The very nice Sheriff pulled up along side and was just asking if I needed any help. "Nope", I replied, "just pulling some coordinates for these signs here". He smiled, waved and told me to have a good day.. Then I silently exhaled as they both drove off and thought to myself how cool it was that they are out there patrolling the roads. I have read many times in the logs of other caches how the police are constantly stopping by when we are out looking for our treasures. I hope we are not too much of an annoyance but I can imagine they will all eventually know what GeoCaching is as they check on our legally parked cars.
Posted by Unknown at 9:19 AM