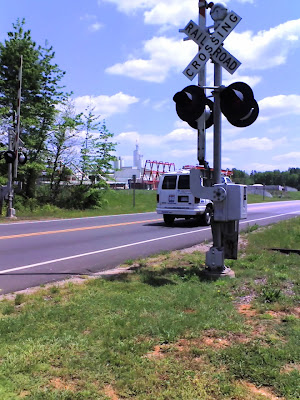 It all started out so innocent.

Found some interesting rail road signals out in the middle of no where near Oxford, NC. Liked it so I much I put a pretty hard to find cache right on the tracks. Then I did a little more research and found an entire railway system that was sitting there doing nothing. People drive by it or over it everyday and do not realize it was there. Well we gotta do something about this.

So I created a series called "Playing on the Train Tracks", which currently has a total of six caches but I have a feeling I may have a boat load more soon.

Some have as pictured here, no tracks on the streets but they are nearby. Others have tracks that are in secluded places where there are no other signs of the rail road anywhere and some of the tracks are completely gone but the maps still show them as being there. Usually there is just pieces of existence like old electrical boxes or part of a signal station. 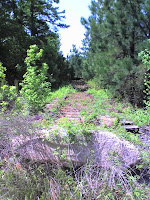 Still going through the series shows you things of a time gone by. If anything else you can enjoy some nice scenery in North Carolina and a fun road trip. I plan on doing this series from Henderson all the way south of Raleigh. Will take a while but I will get there.

In any case I hope you enjoy this series as much as I enjoy finding more spots to put caches.
Posted by Unknown at 11:49 AM