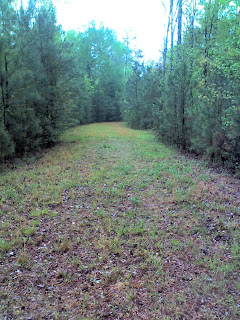 Had a great time caching today with several hours worth under my belt. Here is the overall list and it would appear that I walked over 8 miles. No wonder me dogs are barking.
Found - Rock Pile, North Carolina

This was a beautiful walk. The cache itself was quickly found but again with all the green of North Carolina, why rush? 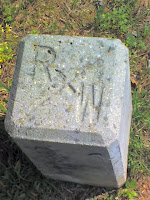 Found - 'Cause You Love Me For It, North Carolina

Ever have one of those caches where you know where the cache is, you can hear it breathing, there is even a clue telling you it's there.... yet you can't find the dang thing.. Looked for 10 minutes on this one until finally success. Phew!


By the way saw this at the cache site... What is it? Benchmark maybe? 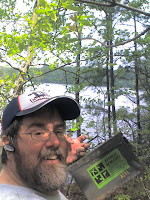 This was fun. My parking coords did not put me near the cache and I did not take the time to Google Earth the area.. Big mistake. Tried to find an entry point to what is actually a well used park. Ended up going up a road that I thought was part of the park. Instead it turned out being an area next to the park but the owner said if I parked down the entrance way I could enter the park there. Cool! Found the cache after some frustrating tries and then enjoyed walking several miles from beginning to end. Not because I had to mind you but because I wanted to. The view was fantastic and I wanted to see more. 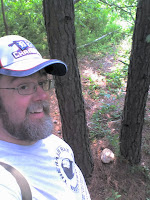 A rather quick cache that include a bit of a hike to actually get to the site. This was the first of three separate places today where I spotted deer walking around. 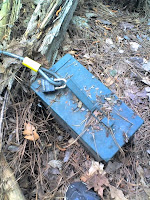 Found - Crowder Cache, North Carolina
Had to laugh at this particular cache. Apparently the other caches in this area have been muggled. The owner of this cache took extra steps to make sure it didn't happen again. 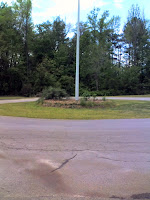 When I stopped near this area I confused what I thought was a roundabout and the actual roundabout itself. Turns out this roundabout is in a church parking lot. Had an added challenge of a squad car parked about 50 yards away with two fine officers doing paper work. So I do what I always do and put on my backpack and head off into the woods. I guess I didn't look suspicious and they never stopped me. With my caching done I waved as I drove off. Received another woodlen scare when I found several deer in this area too. That do make the heart start a pump'n. 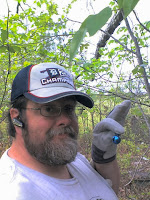 I really wanted to do this particular cache for several months now. Though the thought of a briar patch and some serious bushwacking did not appeal to me. Determined even with the possibility of some good scrapes I grabbing my favorite bushwacking stick and swiped through.
Note, I don't have a problem showing the cache here because the owner tells you straight out what you are looking for. Finding it is entirely another matter. After several minutes of searching I found my prize and not a scratch on me. 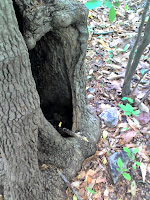 This one makes me want to wallow in my own beer. Spent over 90 minutes looking for an ammo box high in the hills of South West Raleigh. The walk included some very deep woods trails to the point where I was thinking to myself - dang this is some deep stuff. Cell phone had five bars so on I went. Then there was a rather steep climb to the upper levels. This 300 pound cacher made it up with a little wheezing but felt great doing it. Then after scouring the country side came up with nada, zip, nothing, etc. Long story short, a whole lot of exercise but that is about it.
Will have to take another whack at this when I get a chance. Saw all sorts of swamp areas, ponds, streams and other wildlife like more deer.
All in all a great day of fun and lots of walking. Going to lose this weight one way or another. Might as well enjoy how I do it!