The Road To The Cache May Be Flooded.... 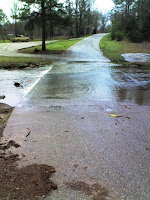 Lunch Hour Time... and that means a quick round of grab and goes.. Did two so far today, first was rather easy. I had seen a similar cache a couple of days before so I knew what to look for.. Cha-ching! Found, signed log and moved on to cache two. This one was not necessarily a fast grab and go but it appeared to not be a mile long hike in the woods either. It was a short hike (about .3 miles) from where I parked but there were a few signs of trouble along the way. 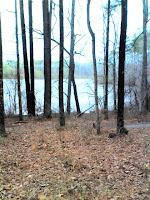 First was the road in Fox Park itself. Just as I was coming up to the parking area I found the once small stream that went under the road was now gorged and flowing OVER the road. Not like it was half a foot deep or anything but it was moving quite well and just enough to say, should I take the chance? On further examination it was only about an inch or two deep and I could see several other normal cars that just went through without difficulty so I went for it. Shy of some sloshing as I waded through, it was no big deal.. After that obstacle I found that there is a nice parking area just before you head for the pond. 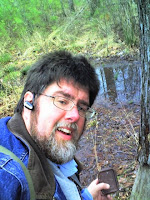 Once parked I grabbed my handy backpack and headed towards the pond. The trails were remarkably dry given by how high the water was. Walked about .2 of a mile and hit an interesting dilemma. My GPS was bouncing around a tad and I noticed that my destination was showing right smack in the middle of some nasty briers. "Oh sure", I think. "Just evil enough to put it in there." But I was determined to find my prize so with the help of some gloves and a couple of good sticks I bushwhacked my way through. Made if about 2/3rd of the way through the sharp toothed buggers only to notice that the cache was actually just on the other side of this nasty place. Needless to say I backtracked and did a quick end around to reach the coords. After a few more moments of "where da heck is it?" I found it in a really creepy spot but there it was and I was never so relieved...
The rest as they say is logged and in history.
TNLNSL
Great fun!
Posted by Unknown at 11:13 AM