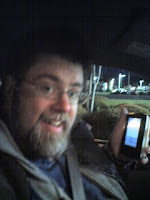 There is nothing like the thrill of caching at night. Depending on the situation you obviously have to be careful but on the other hand - woot - what a rush! It is even sweeter when you are on the look out for FTFs.

Today was no exception as I just had to attempt a quick grab and go of a cache that just published. The plan was simple, try to be as stealthy as you can, find the cache, sign the log and boogey on out of there.

Slightly "Off Your Rocker" in Garner, NC was just that kind of cache. So in the dark and holding my handy dandy flashlight I went a search'n. After several agonizing minutes I was able to find the cache and make a hasty retreat to my car to sign the log. Interesting thing was I had trouble finding where the darn thing originally was but did manage to get everything placed as found. During that time though I kept thinking how embarrising it was holding half the cache and not finding the top!?! My heart did eventually stop beating and all is well - phew.
Posted by Unknown at 5:34 AM