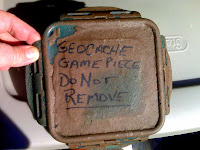 Yeah - Yeah, I know these things happen but this was a real first for me. One of my fave geocaches Kidz Mealz Toyz was officially muggled recently. It must have just happened because it was just found a couple of days ago.

Now don't get me wrong, I have around 100 geocaches out there and I have replaced a couple from controlled burnings and the occasional 35mm being broken or lost, no biggie. This one though was made specifically for kids. It is off a fairly travelled road with no side walks and is well hidden next to a large tree and covered by a flat rock, wood and nearby foliage.
The hide was a large lock 'n lock box filled with unopened kids meal toys from the local restaurants. I came by today for my once a month checkup and refill only to be surprised to see only the lid sitting perfectly upright in it's hiding spot but the rest was gone. I think the finder knew what they were doing because the words "Do Not Remove" was clearly on the cover.
Sure this happens and I will get over it. In fact it has already been replaced. Still cheezes me off what some people do just to be cruel.
Posted by Unknown at 10:37 AM

It is real discouraging... I have a couple of ideas for places in and around a couple of parks but I have been leery of putting caches there because of the muggle factor.

Of course I have the same thing with geocoins and travel bugs... people taking them and adding them to collections or just tossing them aside...

"Cheezed" is an interesting word... I always say it "hacks" me off.

It will happen to every geocache hider if enough time goes by. I hid a nice geocache for the children and it was muggled almost immediately. Muggled is probably not the proper work because I have cause to think it was a "fellow" geocacher that did it! Keep your chin up. It will happen. Just let it roll off your back and keep hiding 'em.

We came across a TB hotel this past weekend that apparently was missing. It had more than 200 finds if I remember right and it was near an airport. We found the perfect spot and sure enough that seems like it was the place. It stinks, too, cause there were a bunch of coins in there and we wanted to swap out. Some people just have to be jerks.