Good Example of a FTF Geocache 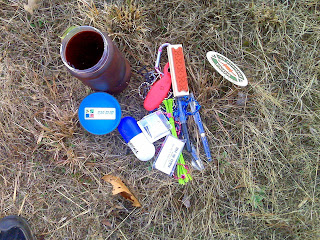 Don't know why but I am still a little cheesed about that disgusting FTF I endured the other day (Ickiest FTF Ever). I wasn't sure how much until my experience today.

I think I have mentioned it before but if not I have a nice Blackberry Curve for my personal cell phone and yes before you even say it, I'm addicted to it. Like big time addicted to the point where I fully understand why they call it "crackberry". This I guess would make me a crackberry-head of sorts. Anyways on my phone of wonders is the ability to receive email notices when they arrive. In which came an alert that a geocache just published and was only three miles from my home. Hokey Smokes gotta boogey! So I jump into my cachemobile with teeth clenched, hands on the wheel and barrel down the road at no more than the posted speed limit. Damn you moral conscience. 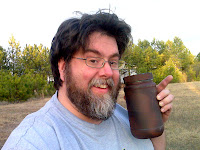 A few minutes later I arrived at the cache area. There was no one around so I was free to enjoy the hunt and take my time. It was quiet and even though the winter sun was fading I took out my Blackberry, fired up Geocache Navigator and there without me having to load it was all the geocache information. I didn't have to load it from my PC, nor did I have to put the coordinates manually into my GPS. Just turn it on and go. I really love technology when it works.

Fortunately for me the geocache was only about 100 feet or so from where I parked. I did not really need to use the compass feature and went straight to the radar. This is a much more accurate and visual way of seeing where you are and where the cache is. Basically follow an arrow until it is over the dot representing the geocache. Pretty simple. 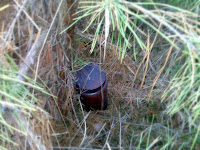 Nestled in between a clump of small pine trees was small plastic container cammied brown. A pretty quick find all in all and the coords where pretty much dead on. Sometimes it can be as far as 30 feet away which gives you a more difficult find. Not this one though.

I opened up the cache and examined the swag inside. New geocaches tend to have better swag and this was no exception. It had several really nice pens of which I traded for one of my first aid kits. I then did my favorite thing for a FTF. I was the first to sign it.. Ahh, clean sheets, nothing quite like being the first to find a geocache. Good Times...

So why was this FTF so much better than my other one? There are several reasons. First this geocache was put in a safe spot in which I did not have to worry about hunters in the area. This was a clean, safe open area without the issues of broken glass, torn metal, empty propane tanks and oh yeah rotting deer carcasses. A much better experience for the cacher which makes better and more appreciative loggings at geocaching.com.

So as usual I'm not letting out the details about the cache itself but I did want to say thank you to the geocacher who hid this fine cache and hopefully others will follow their example of thinking more about where you place a cache and how it effects those who hunt them. Kuddos.
Posted by Unknown at 3:09 PM

It must be nice to have the ability to receive the new posts on the go like that.

Looks like a nice cache to find, whether first or not. What a change of pace from your last FTF!