Why DNFs Are So Important In GeoCaching 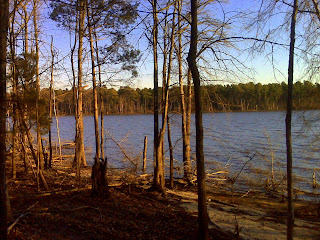 Yesterday was beautiful out with all that bright sunshine yet chilly temps. Here in Raleigh, NC we have had a week or so of cold and gloomy days. Not the norm and when I left from work to sparkling blue and that big bright shiny thing in the sky I just had to try for one geocache.

One in particular has been on my radar all last year. It was an exit further than I usually travel when going home and was next to a lake. "Why not?", I thought to myself. The sun this time of year is out just a tad longer so I would have plenty of time to find this regular sized cache.
I was rather giddy when I took my walking stick from my car trunk. This was a nice 300 foot walk in the woods and I could see the setting sun reflecting off the lake. At the very least I can get a couple of good photos. In no time I was at ground zero and poking everywhere with my walking stick. Then I poked some more, even more and more after that.... nothing. I spiralled out from GZ until I had about 45 feet all away around - nada. Checked every possible hole, log, hill, tree, bush and still nothing. With the sun now close to setting the wind had kicked up and it was getting dark. "Well shoot", guess it was time to call it a day.
I hate marking DNFs or "Did Not Finds" at Geocaching.com but I still do. Lets face it, nobody wants to say, "hey look at me, I failed!!!". Many geocachers do not log their missed finds for just that reason but that does not help anybody. I don't care how many finds you have or have not found. Nobody checks your stats that closely and then ridicules you because of them. In fact, DNFs have a very important purpose. I went back and checked the latest logs for the cache and sure enough there were half a dozen logged DNFs for the sight. Now if I had done that in the first place I wouldn't have even tried but this just goes to show you that this cache is either really buried somewhere or just plain gone. Having a bunch of DNF logs is a clue to the geocache owner that maybe they better check and see if it is still there, but they won't know that unless geocachers log their DNFs. 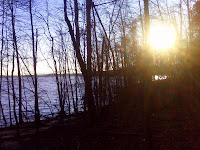 So that was what I did. I logged the DNF, uploaded a couple of my photos that I had taken and then flagged the cache for maintenance. This way I know the owner is aware of the possible condition of the cache. Hopefully I can find it after the all fixed is sounded.
See ya on the trails!
Posted by Unknown at 4:42 AM

So True.
Pays to let the owner know by a log that there have been problems with there cache

I understand that DNFs are important, but currently I'm not experienced enough to make the difference between a DNF due to the state of the cache or a DNF due to my inexperience or stupidity. In the beginning, I had to go back five times before I found a cache. It's better now, but not good enough to judge on the cache itself.

In the beginning I would log more DNF knowing my lack of cache-sense was the main cause but I think geocache owners will see number of finds and look more at number of DNFs in a row from multiple geocachers. In my case there were a bunch with geocachers that had 3000 or 4000 finds. If this happens with my caches I check them regardless.

I always post DNFs. No matter if they are 1/1s or something else. Heck, it might be because I couldn't find it. They are helpful either way.

Even if just starting, log 'em. It's part of the game. Just make that as a note with the DNF -- "Looked 20 minutes, but I'm inexperienced so it could just be me." Either way, it's a record of what happens at that site.

DNFs are very important to this game. I always encourage everyone to post them. They aren't a badge of dishonor. Heck, sometimes, it's a badge of honor for the cache hider!

I completely agree with your stance on DNFs.

I've read quite a mix of opinions about posting "needs maintenance." I think I would avoid that, unless the cache was in obvious disrepair.

Shame that people will blatantly disregard the simple instructions that are typically written on, and in, every cache.