Put This In Your Burrito And Smoke It!!!

Okay this story has nothing to do with geocaching but is a real keeper and one of which I will not forget in a long time. It started out so innocent where my wife, daughter and I were invited to a surprise birthday party for my neighbor and good friend Al. I feel truly blessed because I live in one of my neighborhood's cul-de-sacs. You know when the street suddenly ends and you do a quick circle around to head back from whence you came? Usually there are six or seven houses that follow next to each other all pointing to the center of the circle. Well all of those seven houses have fantastic neighbors and we get together for one heck of a lot of food, libations, poker and good old fashioned laugh till your jaw hurts fun. 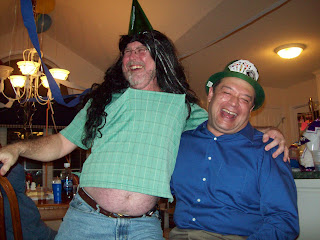 As usual the party was going great and Al blew out his birthday candles (cannot disclose the amount but a fire extinguisher was nearby) on his birthday cake. Jokingly he exclaimed, "No Girl?", as if one could come out of the sheet cake, I mean really... But next thing we know Steve comes out of the room looking like Madonna on a bad hair day and put on a show that brought down the house. Everyone laughed so hard we couldn't stand it. Just shows how much fun we have when we get together. Great times.

After we settled down the food started appearing everywhere and we started digging in. The other cool thing about my neighbors is ALL of the wives can cook.. I mean cook with a capital "C". We were indulging in some home made Spanish-based cooking including burritos. I fill up my plate with all sorts of delights and I ask "where's the hot sauce?". Steve now de-boobittized agrees and we looked around. A bottle was placed in front of us by our friend Dick who happens to be quite the expert on home growing chilies and making of hot sauces.

"Do you like heat?", he says with a slight smile.

"Sure the hotter the better", echo Steve and myself.

"You sure?", repeats Dick. Now any normal person would have caught on right away and questioned the situation, but after a couple of cold ones and all the testosterone being tossed around we were ripe for catastrophe. "Try that" as he points to the small bottle before us. 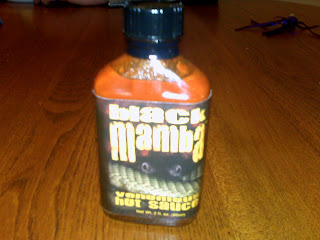 It was called Black Mamba. The bottle was so tiny and the coloring of the sauce was not scary in appearance. Sure it had the words "Venomous Hot Sauce" and "Extreme Heat" on the label but that was just clever marketing.... Right?

Before I go any further let me tell you right off the bat that when the words "Extreme Heat" are on the label take heed. I mean seriously, take fricken heed. So being all macho and stuff, Steve and I pour this stuff on top of our burritos, give a salute to each other and dig in..... Nothing. Bit of smokey flavor and 30 more seconds later... nada.

We look at each other and then to Dick who is completely at a loss of words. Another 30 seconds go by and we take a few more bites. Not a dang, wait a minute... a slight tingle in the back of my throat starts ups. Kind of a feeling like you just swallowed smoke from a nearby campfire. More of an annoyance really, Hold on. A small ember of heat begins to form on the back of my tongue and it's hot like you tasted some fresh Wasabi at your nearby Sushi Bar. On a scale of 1 to 10 I would say it was at a solid 6 with just enough heat to.... Holy Cow! Somebody just fanned that little red ember into a white hot charcoal and it brought twelve of it's briquette buddies with him.

RED ALERT!!! In one swoop I apparently turned seven different shades of red, my eyes started popping out of my head, I involuntarily started tearing and my hands clenched so hard that it had bent the fork in my hand without realizing it. The experience can only be described as extreme searing white hot pain followed by a demanding that someone put me out of my misery before my tongue completely flame broils my Medula Umblingada!!!

That has been without a doubt the most unbearable pain I have ever had in my mouth without being physically set on fire. I could only imagine what was going through Steve's mind but since he no longer could talk and had tuned white as ghost I figured that he was fighting his own demons right now and apparently they were winning...

It took me about an hour before the "heat" settled down enough for me to actually go back and enjoy the rest of the party. It took a bit longer for Steve but at least he didn't go into antiphalactic shock through the process. I will not even go into the fun I had the day later but the intestinal distress among other flaming orifice was enough to remind me that I will never again partake in such searing activities... at least until next time.

Okay, I have to add my own story here. My friends all know that I can handle some pretty hot stuff. I even made a name for myself at the local Buffalo Wild Wings one night when I impressed the staff with my ability to eat their best (aka: hottest) stuff. One staffer was even telling stories to other customers on other nights. Back to the story.

A regular BBQ Rib Fest comes to downtown Lincoln, NE every year. The first year my buddies and I went, I ordered some ribs loaded with some THERMONUCLEAR sauce that had a reputation. A little bit on some coleslaw was hotter than even I expected, but with my experience, I didn't hold back. I began downing the ribs without any problem, never requiring more than the single drink medium cup of soda I had.

But a friend decided that I was just messing with people and took a bet. For $1 (yes, only $1...his bet) he had to swallow a small amount and not drink anything for two minutes. Well, he some miscommunication occured, and at the end of the two minutes, he spit out the sauce that had rested on his tongue the whole time before running to the nearby garbage can and puking out everything he had just finished eating. He got $1 from each of us.

My other buddy, who can handle things a bit better than the first, tried some himself, but swallowed it being a bit brighter than the other guy. About 30 seconds later, he was crying on the side of the street.

All the while, I continued eating the ribs laughing at my friends, a third guy looking at me with awe at how only a few beads of sweat was my only physical reaction.

Call me a light-weight. Call me chicken. Call me anything you want. I don't eat that stuff. I learned that lesson at a very young age.

Interesting with me on hot and spicy stuff. I actually like the taste. Problem is my tongue is very sensitive, so I stay away. :(