That Would Be A 81MM Mortar Carry Tube, Alex. 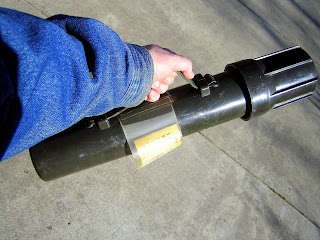 One of my recent GeoSnippits tutorial videos called "GeoSnippits Geocache Navigator Tutorial Part Two" had an unusual geocache of which I found. It was a large tube that was two feet long, three inches in diameter with a large cap on the top and a nice handle on the sides. After the video aired on You Tube I received several posts and emails asking what this strange tube was. Quite frankly I didn't know.

At first I looked over the internet, called several Army Surplus stores and still couldn't find an accurate photograph or name of the plastic object. Then today I stopped by my local Army Surplus store and there it was. The very item I was searching for. I again asked the store attendent what it was and they did not know but they said they had a few more in the corner and one had a label on it.
It said that it was a Cartridge for an 81MM Mortar M889. There was a bunch of category stuff most likely warehouse information but there it was. A transport cartridge for a mortar. 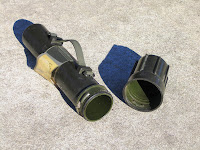 I purchased one for $7.00 and will most likely use it for a unique cache. Below are some shots to show you the inside and with the cap off. 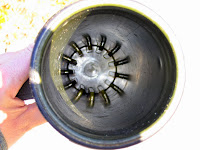 That is definitely an intersting cache container! Have not seen anything like that yet in my travels. I do love to discover the many different containers that people place out there though. Feel free to check out my new blog that I just started a couple of weeks ago for geocaching. I am hoping to have it really up and running within the next month or so. Happy Caching!

Using such a container is begging for a visit from the local bomb squad... and they CAN bill you for their efforts. I would avoid this one.

I would wonder what people would think if they found this one, as others have posted. If it's deep in the woods and away from the "scared" people around, I think it would be pretty wild. Seems like a good container.

I'm going to probably buy some more lock-and-locks for my next hides, though. I have a couple smaller ones painted and ready to go, but with the stickers on them!

Would be cool to find one of these out in the middle of nowhere though!

I was one of the inquiring folks, after viewing your video... I was looking online tonight and they are out there but much more than $7 especially after you pay shipping. I will check with my local surplus place... While I can see the point of some of the concern.. this size of container I would be thinking of a cache out in the woods anyway. Very cool! I was also thinking oen could make a similiar size tube with PVC and fittings. I have seen this once and was very cool. Regards
Chris In Denver,CO.

That's a container. Wonder though, how geocaching containers became connected with the military?

Have to agree with Carolina. Thought about going after a cache is a pretty visible area in front of a public utility facility. Ammo can? Public utility? Not me.