I Have Got To Get Night Vision Goggles 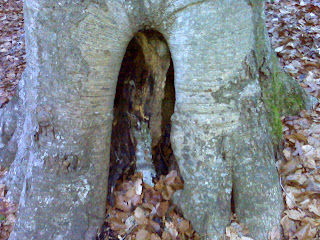 Another glorious day in North Carolina. It was quite cool out and the air hung still and had that electric snap to it that immediately told you there wasn't a cloud in the sky. Yes I was on my way to work but I also was on a mission. A mission to get me an FTF (First To Find). Late last night a geocache that was sorta-kinda-mostly on my way to work had published. I thought to myself that no one would go for this this late and I would be able to swoop in first thing. Best laid plans...

As I drove to the geocache site with the idea of arriving with just enough morning daylight that I would not need a flashlight. The cache was in a wooded area but not too crazy that I needed extra equipment. Driving to where the coords said I would be closest was when I hit my first bump in the road, there was no where to park. Semi-busy street and no side streets for half a mile either way. Well that sucks. Then I noticed just up the street a bunch of construction workers parked on the road. Hmmm, I wonder. Rolling down my window I asked a kindly looking construction worker if I could park in front of the five or six trucks and cars. He said that it wouldn't be a problem because they had to work across the street at their work site. I thanked him and quickly parked.

The geocache was about 400 feet away down a steep ten foot slope from the sidewalk to the base of the hill. Not bad enough that I thought "no way" yet steep enough that if not careful I would have sounded something like a VW Bug rolling sideways down a ski slope. So I grabbed a tree here and pulled a branch there until safe on the woodsie floor. I used Geocache Navigator on my BlackBerry just to be sure if no one else may have found the cache yet. There was a log entry but the cacher stated a DNF! This surprised me that someone actually was here earlier than me but maybe it was too dark out at the time to find it. So I continued thinking the FTF was still there for the taking.

In short order I found the hiding spot which was a three foot high gnome hole embedded into a huge oak tree. I banged around the area enough to be sure that something besides Winnie the Pooh wasn't sleeping inside. Then carefully I pulled away the camouflage and saw the cache way in the back. There was enough wood in the hiding place that I could not see everything as clearly as I would like. Then taking a deep breath I reached in while chanting the mantra "Don't get bit.. Don't get bit.." Luck smiled upon me and I had the clean Lock 'n Lock box in my hand. 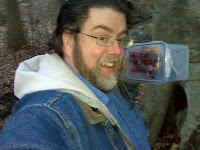 I had read in the description that the FTF prize was a cool LED flashlight. I moved the rather large logbook that was sitting on top of everything out of the way and searched. Wait a minute.. Where was the flashlight? Oh NO!

Sure enough after opening the logbook there was one entry sitting there and quite obviously mocking me. A cacher who not only found the cache at one minute after midnight was kind enough to note it in the log. "$#&^!#$%!#$", says I. Signing the log I too noted my time of 7:24am and phrased "Missed it by that much". Oh well, you can't win them all.

So the moral of the story is kids... Be sure to hide away that extra cash in poker winnings 'cuz daddy's getting a pair of night vision goggles.

Sorry you missed the FTF, but at least it wasn't a DNF! I feel your pain, however. Out here (SF Bay Area), the place is swarming with FTF hounds. It doesn't matter what time of day (or night) a cache goes live; it'll typically be found within an hour. If you want any shot at an FTF, you've gotta have an LED headlamp. I don't leave home without mine. Thanks for the post.

If anyone has some suggestions for a good led light/hat combo. Please let me know.

This is what I use:
http://www.rei.com/product/751757
Very powerful and light-weight. You can adjust the light levels as well as the direction of light. Works great.

I know a couple people who have the ones from Wal-Mart that cost like 10-15 bucks and they work well.

Is the FTF hunt for you guys that crazy? Around here, it's not bad. New caches usually go a day or two (or longer) before being found.

So, did the guy who posted the DNF actually have the FTF? I went to the cache page and didn't see a DNF there.

You had better save up a pile of money if you want decent NVGs. You could always find a corrupt Jarhead to hook you up, but I suspect that you don't look good in an orange jumpsuit LOL.

I've often wondered how best to search those nooks and crannies and retrieve items from them without subjecting my paw to venomous critters...maybe those trash picking up tools?